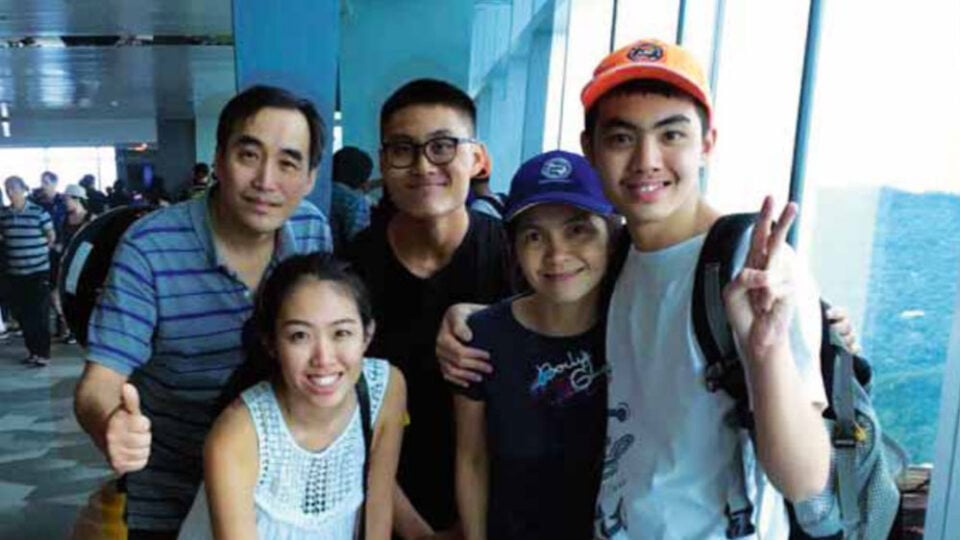 by Alice and Gabriel Ong

My son did not speak until he was six or seven years old. But even before then, I suspected there was something different about Gabriel. I used to teach in a polytechnic, and so I had been trained to spot the signs. That was how I knew, even before he was formally diagnosed, that Gabriel had autism.

I suspected that Gabriel might be autistic when he was only 18 months old. Even then, he was exceptionally sensitive to music. He did not like it when my eldest daughter, Rachel, played the piano and made mistakes. At 18 months, he could go to the piano and play the right notes for her.

I wanted to send him for formal testing then, but I was told they did not have tests for children so young. We had to wait until he was three for a formal diagnosis. In the meantime, I did my best to help him learn. I made signs with words like “chair” and “table” and used velcro to attach them to the chairs and tables in our house. I think this early intervention helped.

Gabriel was non-verbal until six or seven. He enjoys drawing pictures, so that was how we communicated with him. When he was in Primary 4, he came home one day with cuts all over his arms. He had been bullied before – sometimes coming home with his belongings missing because other children had taken them – but these cuts were a first, and looked like they had been made deliberately. We asked him to draw a picture of what happened. He drew a boy using a metal ruler to cut his arms. He included the boy’s name, and we realised the boy was his assigned classroom buddy.

That was a painful time for us. His form teacher insisted that no one in her class would do such a thing, and did not respond when we sent her a picture of Gabriel’s drawing with the boy’s name clearly labelled. We asked the school principal to transfer Gabriel to another class.

But the new form teacher was not supportive either. Gabriel started coming home with zeroes for his spelling tests, even though he had previously done well for spelling. It turned out that Gabriel had not received the list of spelling words. When we asked his new form teacher why, she blamed his new buddy for not giving the list to him. And I thought, she was the teacher, but she was blaming a child?

I thought it was time to move Gabriel into a dedicated special needs school. We applied to Pathlight at the end of his Primary 4. Miraculously, although Pathlight had a three-year waiting list, the school called us one year later to say they had a place for him. What’s more, Gabriel did so well on Pathlight’s academic and “ability to function in a classroom” tests that they let him move on to Primary 6 instead of repeating Primary 5. He spent his secondary school years in Pathlight.

Raising him has not always been easy, but God has been faithful. I recall when he was three years old, my husband lost him in International Merchandise Mart (IMM) and all of us panicked. I brought my other children, Rachel and Raymond (who were in primary school then), from home to IMM to help find him. Eventually Rachel found him sitting in McDonald’s with a couple. They had noticed him playing alone by the escalator and realiszed he must be lost. Gabriel is a very energetic boy who disliked strangers – yet here he was, sitting quietly with a strange couple. Praise God.

More recently, my helper lost him while changing trains as she was bringing him home from Pathlight. They were at Buona Vista Mass Rapid Transit (MRT), changing from the Circle Line to the East-West line, and she lost him in the crowd. She called us immediately.

We try not to let Gabriel travel alone because he does not defend himself. One time, he came home without his smartphone. When we asked him where it was, he drew us a picture: someone on the MRT who had asked to see his phone. Gabriel handed it over, and the person had just walked off with it. There was a $20 overseas call by the time we cancelled his line. Since then, we have only given him cheap phones.

We were so afraid for Gabriel when our helper told us he was lost. But then we received a call from Pathlight. They had gotten a call from a lady who had previously worked in the Autism Resource Centre.She recogniszed Gabriel’s Pathlight uniform and found it odd that he was alone. The lady called Pathlight, requesting permission to accompany Gabriel home, and Pathlight called us. Of course, we gave her permission. She followed Gabriel all the way to our home in Jurong. We learned that a foreign worker had been following Gabriel, and that the lady was Christian too. God had provided again.

Above all I am heartened by Gabriel’s faith. He attends Youth Service and Discipleship Care Group (DCG) regularly and looks forward to coming every week. When we do not come to church – like when he sprained his ankle and did not come for two weeks – I have to inform him in advance, and explain that he can still play the piano, sing songs and worship at home. He still reads the illustrated children’s book of prayers which Johnson and I bought him when he was three years old. Every day, he points to the prayer he wants, and we read it with him.

I am grateful to Mount Carmel Bible-Presbyterian church for supporting Gabriel. He has been attending Mount Carmel since Sunday School, thanks to the support of his Sunday School teachers, DCG leaders and the youths in his DCG. I remember especially an overnight treasure hunt he attended after the Primary School Leaving Examination when he was transiting to youth. Johnson and I thought he would not be able to go, because he had never stayed away from home without us. But the youths welcomed him and made it possible.
I used to think it was important for children to do well in school. Gabriel has given me a new perspective. My hope for Gabriel is that he will stay faithful and one day contribute to society. He is a good person and a faithful boy, and he has enhanced my faith.