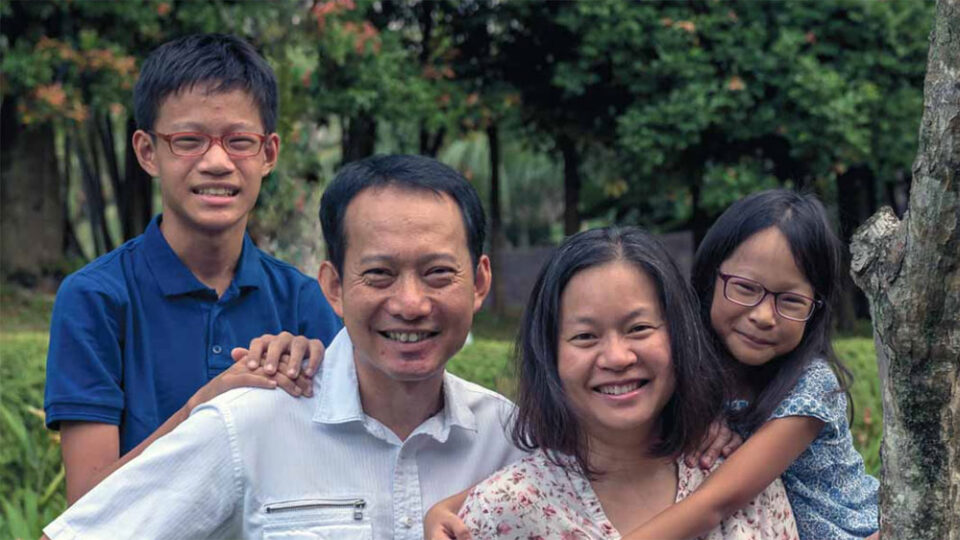 When Emma was six months old, her parents discovered that she had hearing loss in one ear. It came as a shock to Terry and Stephanie Siow. Though Stephanie herself is hearing-impaired, she was not born deaf and had been assured that it would not be hereditary. Their first-born Ethan had no hearing loss and Emma had passed her newborn hearing screening, so the disappointing news was unexpected. Their worries grew when hearing loss was soon discovered in Emma’s other ear too. What was initially assessed to be “moderate” hearing loss in both ears then deteriorated further to “severe” hearing loss. The family sought God.

In the eight years since, the Siows have witnessed God’s faithfulness in His provision of support from medical professionals at National University Hospital (NUH) and Singapore General Hospital (SGH), family, and friends. Their children have grown too: Emma, into a cheerful girl with a positive spirit, and Ethan, into a helpful son and brother. Emma’s early years were challenging for the family because of the time and effort needed to help a young toddler adjust to wearing hearing aids, and later, speech therapy. It was time-consuming, mentally draining and often frustrating, they recall. But they have been learning to trust God with both the process and outcomes. There were months when they would try to help Emma with a particular word or phrase, to no avail.

Indeed, Emma’s speech improved sufficiently for her to be understood by others in a sentence by the time she was six years old, before she had to enter primary school – an answered prayer. For Ethan too, there had been moments of frustration, having to repeat his words often to Emma and Stephanie. “By God’s grace, he has grown to be more understanding and often helps. For example, he sometimes takes phone calls on Stephanie’s behalf now,” says Terry.

They do see how God has placed people in Emma’s life to help her with her hearing challenges. For one, Stephanie’s own experiences in school – and her parents’ experience in helping her with her own hearing impairment – have been invaluable. Stephanie’s mother, Margaret, accompanied Stephanie and Emma to every audiological testing and speech therapy session that they had, coaching Emma at home and correcting mispronunciations that Stephanie sometimes missed due to her own hearing limitations. And, well-prepared by her own mother for school life, Emma has not been shy about wearing hearing aids. She boldly tells classmates what they are and why she needs them, when asked. She is also comfortable teaching her teachers how to use the assistive devices – mini microphones that they wear in class to enable her to hear clearly what they say.

Praise 1 CG – the care group Terry and Stephanie have belonged to since they got married about 17 years ago – has also been an important prayer support group for the family over the years, particularly in praying for Emma all the way from her early speech development to her ongoing progress in school today.

“Today, Emma still has her own academic struggles in school. She still lags behind in English language compared to her classmates, but is a diligent worker who tries her best to keep up. We trust that God will see her through the challenges, just as He saw Stephanie through her school years,” says Terry. In all of this, Emma’s parents are also thankful that she has begun to know Jesus personally and that He is with her. She attended Sunday School since the age of five, growing up in the church alongside friends who enjoy playing together after class too. Emma knows that praying to Jesus will help her feel more assured in her challenges and the family makes it a habit to pray together before bedtime. They also see God’s grace in how He has limited the challenges they face in their lives. “One problem solved, another one comes up. But we need to be thankful that it is not more than we can bear, for Jesus will carry all our burdens for us,” they say.