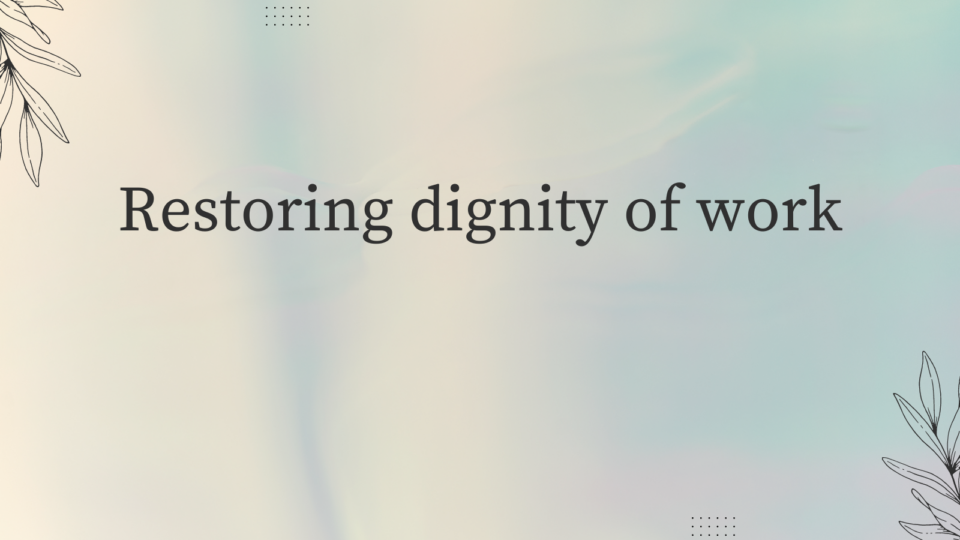 As we emerge from the pandemic to an endemic (DOSCORN orange to yellow), we all heave a sigh of relief. Yet, much has changed during these two years of dealing with the pandemic.

For one, COVID-19 has put a spotlight on the low value society places on work performed by “essential workers”. Two members of parliament (MPs), Mr Zainal and Nominated MP Walter Theseira, in a news article titled “No shame in manual jobs for Singaporeans”, separately urged the government to enhance the workplace conditions and wages for workers such as cleaners and security officers, whose manual or service jobs were regarded as essential during the pandemic. These essential workers’ gross salary falls below the fifth percentile of residents in Singapore (ST 4 Jun 2020). Many parents in the past used to chide their children that they will end up becoming road sweepers or garbage collectors if they do not study hard. There is a strong narrative within society that the value of a person or their success is based primarily on the income which they are able to extract from the free market economy.

Underlying this situation is the essential question: How do we value work as a society?

Diminished view of work and workers

In his most recent book “The Tyranny of Merit”, Harvard Professor Michael J Sandel put forth the idea that although it is right and good that we employ the best person for a job (on merit), meritocracy, when pushed to an extreme, can be tyrannical in nature. It gives oversized rewards to those who are successful when left to pure market forces. It thus creates hubris amongst the successful and the belief that they deserve their large pay cheque due to their own hard work. For those who cannot make it, the opposite effect is then shame and self-blame that they are not good enough, or did not study or work hard enough. As our society become more affluent, the gap between the rich and poor will widen as many of our next generation will be born in increasingly privileged or under-privileged families. Not everyone has the same starting point and access to the same resources.

The tyranny of merit arises from more than the rhetoric of rising (if only you work hard, you will make it in life. Everyone has an equal chance to the good life). It consists in a cluster of attitudes and circumstances that, taken together, have made meritocracy toxic. First, under conditions of rampant inequality and stalled mobility, reiterating the message that we are responsible for our fate and deserved what we get erodes solidarity and demoralises those left behind by globalisation. Second, insisting that a college degree is the primary route to a respectable job and decent life creates a credentialist prejudice that undermines the dignity of work and demeans those who have not been to college; and third, insisting that social and political problems are best solved by highly educated, value-neutral experts is a technocratic conceit that corrupts democracy and disempowers ordinary citizens.

Dignity of work and workers

In ancient cultures in the Old Testament, humans were created to serve the gods as slaves. In Roman society in Jesus’ time, manual labour was shunned by the Romans and they enslaved other nations to do all the manual work. The Bible, however, stands out and gives dignity to work and workers, by first and foremost introducing God in Genesis 1 as a worker. God then made man in His image; imago dei, also as workers after Himself. Giving the commission to have dominion over His creation and material world (Genesis 1:26), God invites humankind to participate in His glorious work of tending the garden, “to work it and to keep it”(Genesis 2:15). Although work was marred by sin and made more difficult in Genesis 3, the commission that humankind was honoured for our role as workers in creation was never diminished. This biblical worldview stands in stark contrast to the contemporary worldview prioritising intellectual work over manual work (and reward accordingly), as if some work is less dignified than others.

The biblical narrative and the gospel of Jesus Christ seems, to me, the only answer having a positive emphasis on work and the worker in comparison to all other narratives in the world today. As the people of God, a royal priesthood and holy nation, regardless of what work God has called us to do on this earthly journey, we need to discharge our duty as if we were working for God. We need to accord honour to all who are performing jobs and work that many of us naturally shun, as fellow image bearers of God. We repent from and correct our misguided views of unbiblical hierarchies of various jobs and profession, in whatever ways we prioritise them in our hearts. All work and workers that contribute to the common good and human flourishing are worthy of dignity and respect. In response, we need to be a voice and advocate for fair wages that give them and their family a decent level of living and conducive work environment.

Sandel also proposes to re-evaluate work according to their real contribution to society or the common good. He advocates for Contributive Justice in conjunction with Distributive Justice. Though this is not an easy endeavour, nonetheless as the body of Christ, we need to apply biblical principles in contemporary culture. If essential workers are so essential, why then do we, as a society, under pay them or view them as having such lowly socio-economic status? How can we change and improve on the unbiblical narrative of merit highlighted by Sandelin his book? After all, the Cross is about un-merited grace! Do we see our success in humble gratitude because God has given us this gift? Do we use our gifting and talents to serve our own pleasure and lifestyles, or be directed by the Holy Spirit to serve those around us?

To whom much is given, much will be required.