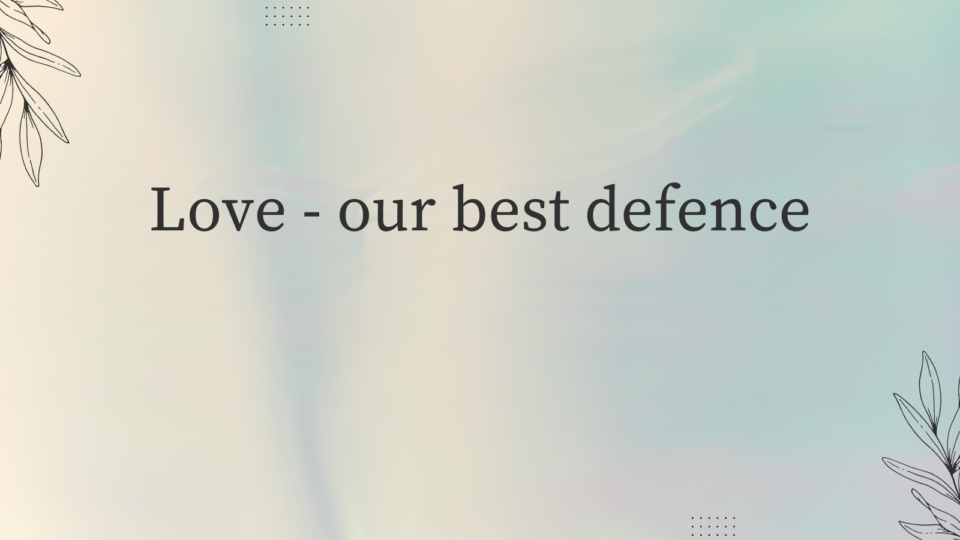 Let me share a story —a story I wish I never had to experience. A lunch I would never forget.

On 24 February 2022, I was in the midst of a two-week executive learning programme with senior leaders who flew in from around the world to the renowned INSEAD Singapore campus. My classmates and I were having lunch in tables of five (COVID-19 restrictions) when one of them suddenly started crying. Taken aback, the four of us looked at one another, not knowing what to say, till someone bravely asked, “What happened?” This towering German lady —successful, confident, was by now sobbing like a lost child. With tears rolling down her cheeks, she whispered, “Read the news.”

It was the fateful day the Russia-Ukraine war began. An unspoken source of solemnness and bitter worry rained upon all of us. She had family in Ukraine and the government was restricting men from leaving the country as they needed to stay back to fight. Sirens, bombings and fighter plane engines flooded the backdrop of every call she made. I had chills down my spine. Usually eloquent, this time round, no words would come to mind, no matter how much I tried. I could only recall the war images from my history textbooks and from what my grandmother had described when she witnessed World War Two in 1941 and was a victim of the bombing.

I recalled God’s words —Thou shalt love thy neighbour as thyself (Matthew22:39). In fact, it is on this commandment that we hang all the laws and the prophets. I offered gentle daily prayers for her and her family, assured that our Father would hear our pleas for the safety of Ukrainians who were fighting for their land and glory. As concrete steps from a distance, we made donations in various ways. In the healthcare industry, many of us made contributions of medication and medical equipment that were courageously shipped into Ukraine by volunteers. While the aspired conqueror had long forsaken the responsibilities of being a good neighbour, many countries surrounding Ukraine welcomed the panic-stricken Ukrainians with open arms, ushering all who entered with warm meals and roofs above their heads, including a small wooden bridge in Romania that had been heart-warmingly transformed into a toy bridge, as this border checkpoint was adorned with children’s toys, to welcome Ukrainian children and their families with such great love.

In times like this, love is our best defence. We may not have the power to stop the external environment and decision-makers, but our strength can be rooted in the foundation of God’s love. Many a time we underestimate the power of prayers and we get sucked into the whirlpool of emotions and uncertainty. The war can be external like the one we are witnessing now in Ukraine, a rare occurrence, but deep inside, we wish it will not be something we will have to experience in our lifetime, or even our children’s. But the parallel of our daily lives is also true —the battles we fight day-to-day, the baggage we carry on our shoulders and in the back of our minds may haunt us. Sometimes, the wars in our minds are the most unbearable, with turbulent hearts and the tears we painstakingly try to hold back.

The best decision ever. Always.

In our Father, we find peace. He promises strength, mercy and grace. When we surrender, it means letting everything go and letting God take over. In so doing, we give up our worries, hurt and pain in exchange for embarking on a journey —a path by choice, a self-discovery route to know God more. When oceans rise and thunders roar, our Father promises He will soar with us above the storm. We just need to be still. God did not give us a spirit of timidity, but a spirit of power, of love and of self-discipline (2 Timothy 1:7). Especially during tough times, the tendency of our faith to be shaken is even higher, and our doubts race even more quickly. It is then that our self-discipline for prayers needs to be heightened even more. As the going gets tougher, we hold on to God and prayers even more tightly, helming Him as our lifeline, just like each breath we subconsciously take. We have to be crystal clear that our eyes are fixed on the cross, so we embrace with certainty that God is with us fighting each battle instead of relying on our human self, trying to cast our sight on the storm and questioning where God is. His grace is sufficient for us, for His power is made perfect in weakness —our weaknesses, our vulnerabilities.

Words are indeed easily said than done. So allow me to share another recent experience where I was put to the test when I faced a difficult situation.

After attending a friends’ gathering, I was driving back home and on a narrow two-way street, a car was parked by the side of the road and I had to pivot right to overtake it. This road was on top of a slight dune, so it was an impossible stunt to overtake the stationary car with an oncoming car that suddenly appeared and was speeding towards me. An accidental most happened, as you could imagine, but thankfully both cars came to a halt with a miraculously narrow two inch-distance in between. Inevitably, I was shocked by the speed of the oncoming car and its reluctance to stop, but I was even more intimidated when the passenger, a Chinese man in his fifties, started gesturing rigorously, almost like in a Tik-Tok video, with his fingers doing most of the talking and his eyes glaring at me. I did not know what to do, I was fearful if I was meeting a road bully for the first time in my life. So I took a deep breath, prayed and decided to take the brave step to get out of the car. After the fact, I did wonder if I was insane in thinking I could face the driver and animated passenger as I could potentially have been punched right in my face the moment I tried to approach them. Traffic started to pile up behind both cars while my fierce “opponents” refused to reverse their car, though that was the easiest way to clear the deadlock. Standing helpless, I prayed to God again, pleading for a solution, as the last thing I wanted at that juncture was to move my car, which was in such close proximity that I ran the risk of scratching the other party’s car, which would definitely be a monstrous nightmare and lead to a predictable trip to the A&E.

Somehow, an idea struck me and I went to the car behind mine, asking if he could help keep a lookout for me as I navigated away from the two-inch gap and repositioned my car to get back into lane. A Malay man was driving the SUV behind me and his dad, in his sixties, offered to step out to graciously help me. In a calm deep voice, he assured me not to be scared and he would help me —it was the kindest words I had heard in the silence of the night. Heaving a sigh of relief, I listened to his instructions as I meticulously moved out of the tight situation with his help. While the passengers in opposite car were still busy doing their mambo-jumbo hand movements, I looked at the elderly man and both of us smiled with our eyes given the masks —without words but with much acknowledgement of the situation —and you can imagine the immense gratefulness from my end.

Love thy neighbours, as the second commandment governed, and I saw it in action that night and will remember it close to my heart. I am deeply appreciative of the multiracial DNA of Singapore and how it defines us as one country, as one people. The peace we have now did not come by chance but by deliberate construct. More importantly, it is the mutual understanding of how this diverse culture and mutual understanding has, since our independence, defined who we are to the world, and to ourselves. A little tolerance goes a long way, and the love in all our actions reflects our Christ-like behaviour, just as how a day of relentless prayers and conversations with God will set us apart from the hustle and bustle of our lives —it is a sure-win to inner peace, strength and intimacy with our Saviour.

Let’s embrace patience and love for our neighbours, surrender ourselves to God and let peace flow into our hearts as we serve Him!